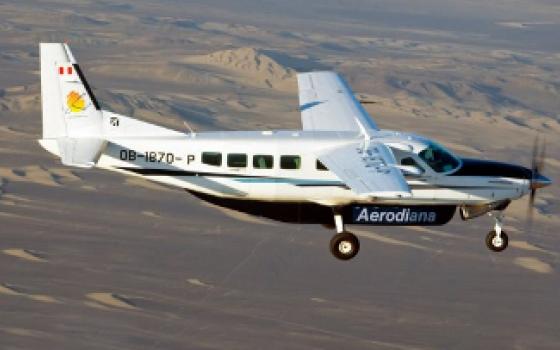 Paracas is located 250 km. south of Lima city, is a beautiful bay full of attractions nearby like The Paracas National reserve, The Ballestas Islands and many options of adventure sports like sandboard and sandrail in the Paracas dunes. There is also an option to overfly The Nazca lines departing from Pisco airport which is just 15 minutes far from this bay.

We begin the tour at 4:30 a.m. in the morning when our representative picks you up from your hotel or place agreed and drives you straight to the first stop Paracas city, then we will start the tour to the Ballestas Islands, known as the Peruvian Galapagos. These islands are spectacular, eroded into numerous arches and caves which provide shelter for thousands of sea lions and seabirds, some of which are very rare.
We then will drive to the Pisco airport located 15 minutes away from Paracas to take the plane for the Nazca Lines overfly. It is an one hour and forty minutes flight over a high arid plateau that stretches between the towns of Nazca and Palpa on a large flat area of southern Peru, where strange hieroglyphics elaborated by the inhabitants of the Nazca Culture represent figures of different animals and plants, being surprising the spectacular dimension of the drawings and the enigma of their elaboration. Then, spare time to have lunch at a restaurant of your election. We get back to Lima at around 6:00 p.m.
BACK BOOK NOW