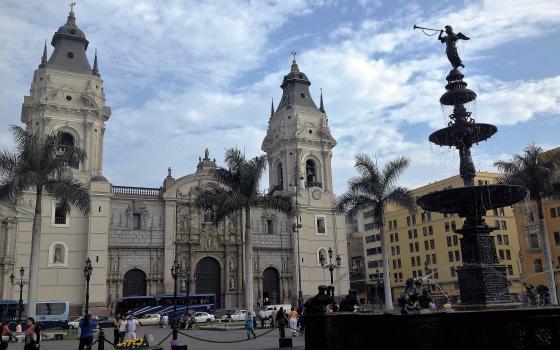 A private tour of the colonial and modern Lima. We will drive you through historical monuments and locations such as the Government Palace, the Municipality palace, the Cathedral of Lima, and main colonial buildings around the Plaza Mayor. Then a short tour of the modern districts of San Isidro and Miraflores visiting places like The Love Park. Finally we will visit a shopping center named Larco Mar, which was built on a spectacular cliff overlooking the Pacific Ocean.

Description of the tour: Pick-up from your hotel in a private car and go straight to Barranco, the bohemian district of Lima. Visit the Bridge of Sighs, the Mirador, the old Ermita and the main park. Also will get a nice look of the Pacific Ocean from there. Then go to Miraflores, visit the Love Park and have a sightseeing of the pre-Inca ruins of Huaca Pucllana (outside view) and Kennedy Park. After this, head to Colonial Lima district, visit of Plaza San Martin. Then, walk through the crowded Jiron de la Union and end up in the Main Plaza of Lima. Start walking around the main square where we will see: The Government Palace, The City Hall, La Casa del Oidor, The Cathedral, The Archbishop Palace, the old bronze Fountain, Taulichusco´s stone, Pasaje Olaya and Club de la Unión also will see the Desamparados Train station and the oldest bar in the city called "Cordano bar".

Price per person: $45.00 USD
Duration: 3 1/2 hours
- A minimum of two participants are required for this tour.
- Prices in American dollars.

Not Included:
- Drinks & meals
- This rate is valid only for services starting and ending in Lima, Miraflores or San Isidro districts.